With so many moviemakers disenfranchised because of California’s strict COVID policies, we are witnessing a powerful rise of the Indie filmmaker. And one of those filmmakers is the team behind the hit Amazon Prime TV show, “Radical Body Transformations.”

Their first feature-length film, “From Fat Lolli to 6 Pack Lolli,” is not only a hit on Amazon Prime but received nine nominations in international movie festivals. They have already won one prestigious award and been a finalist three times, with more festivals rounding out the rest of the year. 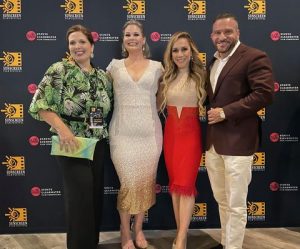 The show and movie revolve around people who want to get in shape – whether that means losing weight and gaining muscle or just the latter. The show follows its cast through the training process and learning meal prep to their radical body transformations – hence the name. Many times, the audience sees the cast member actually on a stage in a body-building competition. One of those cast members has gone on to be a coach on the show, and there are a couple more transitioning from cast to a coaching role.

Here is where we not only mention media bias, SWFL Online News would like to brag about it! I have been cast on the show and am currently transforming myself. As the movie reviewer who got side-lined because of COVID restrictions and theater closings, I will tell you I liked the movie a lot and would have given it five suns (the highest rating on the SWFLONLINENEWS scale) if I had initially seen it in a theater. 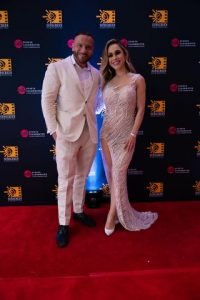 On April 30, 2021, I did get the chance to see this movie on the big screen at the Sunscreen Film Festival in St. Petersburg, and in attendance were two of the movie stars, Anthony Lolli and his wife, Tereza Hakobyan. Also in attendance from the show were cast Mimi Mason, coach Mark Lussier (Connecticut), and his client, Joe (Tampa). Christine Byrne (Massachusetts) and Aaron Woodson (Jacksonville, FL) also traveled to attend the premiere.

Anthony and Tereza are currently training for a six-show body-building competition for their upcoming docuseries, which will also be featured on Amazon Prime. The new show will follow Anthony and Tereza and show the viewers how much time, prep, travel, and dedication is required to compete in these events.

The Sunscreen Film Festival happens once a year. Besides giving out awards, the festival holds classes and networking opportunities for an ever-expanding film market in Florida. Due to having no unionized restrictions for cast and crew and monetary incentives for filmmakers – mainly, they don’t have to pay the money back – Florida has become a smaller and, thankfully, less obnoxious Hollywood. And with the booming economy and rate of people flocking here – a thousand a day – there is no shortage of potential actors or audience.

Although “From Fat Lolli to 6 Pack Lolli” didn’t take home the award at Sunscreen, they succumbed to a documentary about the cultural icon Pat Morita (Mr. Miyagi of Karate Kid fame). There are more exciting things on the way from this team. I will be writing about those details as they become available.

Besides the docuseries mentioned above, the show is about to embark on its second 90 day Challenge. At this writing, the show has just finished its first-ever worldwide 90 day Challenge, and oddly enough, the winner is a local woman from Fort Myers! Kristy Thompson lost almost 30 pounds and added a lot of muscle. Her trainer on the show was the first cast-turned-coach, Monique Cormier – better known on the show as MOCO.

The people behind “Radical Body Transformations” and “From Fat Lolli to Six Pack Lolli” don’t want only to change your health; they want to change your bank account! Do you have what it takes to win the next 12 Week Challenge? If so, you could be $5,000 richer! The next challenge starts on June 1. You can get more details below! You can also join the Facebook RBT forum to learn more about the show and how to make your radical body transformation.

Results from the Sunscreen Film Festival

BEST ANIMATED SHORT – “Would Have” Directed by Dave Siegel