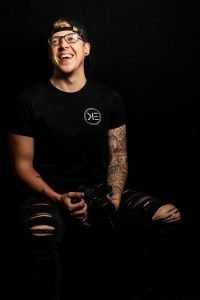 Keith Eccles is likely a name that you do not know – yet. But this first-time director scored a massive hit right out of the gate – so huge that it has evolved into a worldwide movement. The movie “From Fat Lolli to 6 Pack Lolli” had its worldwide film premiere in St. Petersburg at the Sunscreen Film Festival on April 30th. The best part is Mr. Eccles was not slated to direct this fitness phenomenon! The film has garnered nine nominations from international film festivals, won one, and is a finalist three times thus far. I was fortunate enough to chat with Keith to understand the success behind this unique venture.

Angelina: How did you become a director?

Keith Eccles: I am not a director. This is the first time I have done anything to this scale. I’m a freelance videographer and photographer. I do a wide range of different things; I could be doing weddings, promo videos (for business), interviews, or sports stuff. I do everything. I have no niche. I am really into my movies and films.  I love documentaries – those of some of my favorite things.

This is the first thing I have ever done as a director. But I am more than a director; I came up with the story, wrote it, am the cinematographer, filmed it, color-graded it, did the music, and graphic design. I did everything within the movie.

Angelina: How did this production compare to others?

Keith Eccles: Usually, you would have a huge production team for something like this. You would probably have a good team of thirty or more. I had help from some of the team like Anthony, Carlos, James, Michele, and Zack. Everyone gave me their input.

Angelina: How did Anthony (the star of the documentary) find you?

Keith Eccles: Probably four or five years ago, I used to vlog. I would film my fitness journey. I was very small – very skinny. I don’t know what the conversion is for you, but I was around *nine stone. I went to a show called ‘Body Power,’ a three-day super fitness event here in the U.K. – one of the biggest in the world. I went to it for the first time and met all my idols, and I said, from that day, I was going to work for this company one day. And, I didn’t have anything to do with videoing or videography.

I had a crappy camera and just sort of wanted to vlog my journey of me getting bigger and stronger and meeting these fitness celebrities. I posted my stuff on YouTube, and one day, I got a message from a guy called Mike – known in the fitness world as FatBoySlim. He * D.M.’d me and said, “Hey man, I’m Mike Sullivan from Ireland; I have a few people coming over to England to compete in some shows. I have been watching your vlogs. I’ve been trying to get into YouTube. It would be nice if you could film something for me. So, we discussed some money and me going to film for him. I filmed for Mike and did a couple more after that when he came over to England. And then roll over the years, me getting more into videography and photography. I stopped doing my vlogs. It wasn’t an area I wanted to go down anymore.

Angelina: That’s a giant leap from filming Mike to making a full-length film!

Keith Eccles: I had a message one day from Mike asking if he flew me out to New York for a week if I could film him so he could post some videos for his vlog, and I said, of course. New York is a dream place for me. I went to film meet Mike, and I met Anthony on the second day, and that’s where the story starts for me. I recorded some stuff for Anthony on day one. I sent it to him. He loved it. He loved me. That’s where we kicked things off. He wanted to use me as much as he could. We had plans to make a small documentary on YouTube. We had discussions about where this thing could go. I found out he was going to compete. We were going to make maybe 2-3 episodes for Radical Body Transformations on Amazon Prime. We got told the quality of my footage was better than expected, and the distributors recommended turning it into a documentary and having more discussions. We went to the drawing board and asked me what I could do to make it into a documentary and came up with a plan. I went out three times to capture footage with plans in mind and then came back and effectively put it together to make the doc.

Angelina: Please tell me about my favorite cinematic scene – The Brooklyn Bridge

Keith Eccles: That is one of my favorite scenes. When the movie got released, that is the one I get the most *D.M.s about from my perspective, being the filmmaker. People seem to love that. The idea for that was that Anthony lives in Brooklyn, New York, and it’s one of those iconic places. We thought of the bigger picture that this documentary was going to be seen worldwide. For me, seeing something like The Brooklyn Bridge as a tourist is huge. It’s a very famous bridge. All these other places a so famous. That’s where the idea for Anthony in Times Square came in as well. He’s lived there his whole life, so it’s not a big deal for him, but it’s a huge deal for anyone else. So, I said, let’s get up at the crack of dawn and catch the sun coming up with The Brooklyn Bridge, and we can use that as a transition or a *B Roll; we can use it for something at least. Anthony was good with any ideas I had. He agreed with anything I said. He was fantastic. We drove there for sunrise, just filmed him working out. It was planned, but the people around were strangers. There were no extras. It was Anthony and me. It was absolutely freezing. It was just us together. We just created that – winged it. I had no shots planned in my head.

Unfortunately, the Coronavirus prevented Mr. Eccles from attending the world premiere of his directorial debut. But, the movie is available on Amazon Prime with the link below.

To learn more about Keith and his projects, please check out the following links:

*D.M. is Direct messaging (in the context of social media)

*B roll is any supplemental video that considered to be secondary to your primary footage.