Health and fitness have taken a real punch to the gut this year as a thirty-day lockdown to “flatten the curve” turned into a seemingly never-ending “new normal.”

The average American has gained what medicine.net coined as the “Quarantine 15,” but not everyone is sitting around eating cheesy puffs! An elite squad of fifteen trainers is on a mission; to get the world moving and eating right again. 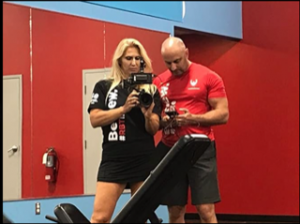 Made even more popular by their surprise hit documentary, “From Fat Lolli to Six Pack Lolli,” the hit Amazon show, Radical Body Transformations(now in its third season)has drawn a new and captive audience – those in quarantine.

A running theme throughout the show is that strength training also requires a mental component to achieve lasting success. And there’s plenty of inspiring cast members to motivate, from a man who survived a horrific accident who doesn’t let a wheelchair stop him from bodybuilding to Trina, a single mom of four making time to not only do weight training but also compete as a body-builder.

I recently spoke with the show’s creator and executive producer, James Hergott, who is coming off the heels of winning the Best Inspirational Documentary Award at (DOC LA) L.A. Documentary Film Festival for “From Fat Lolli to Six Pack Lolli.”

Me: Where did you get the idea for creating this type of show?

James: I have been a film and TV producer for about 20 years, and I also started competing in bodybuilding as a hobby.

Me: How do you decide who gets cast?

James: It’s based on people I think have both a good and unique story as well as people I think will stick with it. It is hard always to get it right, but I’ve gotten better with time, as has the applicants’ quality. We want people from different demographics and a variety of backgrounds and goals.

Me: What type of training or education does the cast learn to ensure success?

James: It is customized to both their goals and lifestyles as everyone is unique in their journey. What is not unique is that it takes a mental effort above everything else, and providing that support through coaching and community is the key to success.

Me: How does this show different from other “reality” shows about weight loss where the contestants are known to plump up again after the show ends?

James: We are not here to exploit people or to show just one group. Our goal is to show a variety of people from various backgrounds and different goals. It could be to lose weight, or it could be someone skinny who needs to add muscle. However, the common theme is that it is about self-improvement and overcoming whatever personal obstacles are faced.

Me: Why do you feel this type of show has done well?

James: I feel with the sedentary lifestyles exasperated by COVID and bad diets, more people than ever before in the western world are out of shape and at risk of poor health. As a result, people can relate to both wanting a change as well as struggling personally. It is highly relatable.

Me: Have you noticed an increase in viewership in this time of COVID?

James: “Yes, as well as applicants.”

Me: How has your filming protocol changed since COVID?

James: Right now, we are limited in travel. We have had to do things more like Skype interviews, and when filming, we have to use masks and social distancing. It has forced us to be more creative to capture footage. In some cases, we have gotten cast to film themselves for something specific with their phones, etc.

Me: Did you have a feeling that “From Fat Lolli to Six Pack Lolli” was going to be such a hit?

James: I didn’t really think of it like that. We just wanted to make a great documentary. I knew that it was raw and showed something that hadn’t been seen but didn’t consider how many people would be reached. I was only thinking about telling the story.

Me: What are some things you could share with our readers who want to make radical body transformations?

James: It is not about a fad diet; it is about making a lifestyle change. If one goes too restrictive, it is impossible to stick to the plan. It is about developing healthy habits and a mindset of a new lifestyle. Also, if you fall off and mess up, it is not the end of the world. You have to get back up on the horse, so to speak. The worst thing is to give up totally and go back to your old ways.

Me: The audience is seeing life-changing results. What has been your favorite moment of filming so far?

James: There are amazing people and stories we have filmed that we have not released yet. A standout moment from released shows is Blake Gauthier from season 3, episode 2, “On Bended Knee,” where he talks about how he couldn’t get down and play with his daughter. He broke down and cried. We have many moments like this, however, through all the episodes. As someone who is also a father to a daughter, it spoke directly to me. We have had people who have overcome abuse, trauma, cancer, and many other things, and these stories have gotten more powerful with COVID and some of the issues faced this year.

Me: You are going to Ireland in your next season. Can you give our readers a teaser about what’s going on over there?

James: RBT (Radical Body Transformations) is truly global now. We have a great group of both trainers and the film crew. Our editor – who did some of the filming for the Lolli movie – is based in Ireland, as our some of our coaches.

The show and the documentary about Anthony Lolli are worth the watch. I highly recommend checking them out.

Radical Body Transformations have SWFL connections, as two local women have been cast and will be featured on the next season, kicking off in 2021.

To learn more about this hit TV show, please check out the links below!