From the cult classic The Wicker Man to the blood–thirsty Count Dracula, Christopher Lee has been the face of cinema villainy for decades. In Lord of Misrule, Lee tells the story of his exceptional career, in films like The Curse of Frankenstein, the James Bond classic The Man with the Golden Gun, Tim Burton’s Sleepy Hollow, and more. 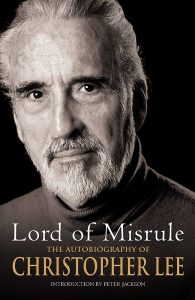 Lord of Misrule, The Autobiography of Sir Christopher Lee

After appearing in more than 300 films, and a legend in his own right, Lee undertook one of the most demanding roles of his career as Saruman in Peter Jackson’s The Lord of the Rings.

Shortly after, as one of the most powerful adversaries in the Star Wars canon, Lee proved that at 80, he is still a commanding screen presence. Written with self–deprecating wit and laced with hilarious anecdotes, Lord of Misrule is a marvelous career history of the man The Guardian called “the coolest actor on the planet.”Okay, now with the obligatory blurb about Christopher Lee being an author out of the way, let’s get to the real Sir Christopher Lee.

If Sir Christopher Lee had just been a movie star, he would still have been an icon. But the late actor, who passed away on 7 June 2015 (aged 93), had an amazing life even beyond his incredible body of work. Whether you’re still lamenting his passing or unsure why his death is such a loss, here’s …..

22 reasons why Christopher Lee will always be a legend.

1) He was entered into the Guinness Book of World Records in 2007 for most screen credits, having appeared in 244 film and TV movies by that point in his career— and then made 15 more movies. He also holds the record for the tallest leading actor — he stood 6’ 5” — but also for starring in the “most films with a sword fight” with 17.

2) His mother was an Italian contessa, and through her Lee descended from Emperor Charlemagne of the Holy Roman Empire and was related to Robert E. Lee, the Confederate general.

3) He met Prince Yusupov and Grand Duke Dmitri Pavlovich, the assassins of the Russian monk Rasputin. He didn’t do this as research for his later film role as Rasputin (in the 1966 Hammer film Rasputin the Mad Monk), but just as a child in the 1920s.

4) At age 17, he saw the death of the murderer Eugen Weidmann in Paris, the last person in France to be publicly executed by guillotine.

5) During World War II, Lee joined the Royal Air Force but wasn’t allowed to fly because of a problem with his optic nerve. So he became an intelligence officer for the Long Range Desert Patrol, a forerunner of the SAS, Britain’s special forces. He fought the Nazis in North Africa, often having up to five missions a day. During this time he helped retake Sicily, prevented a mutiny among his troops, contracted malaria six times in a single year and climbed Mount Vesuvius three days before it erupted.

6) At some point during the war he moved from the LRDP to Winston Churchill’s even more elite Special Operations Executive, whose missions are literally still classified, but involved “conducting espionage, sabotage and reconnaissance in occupied Europe against the Axis powers.” The SOE was more informally called — and I can’t believe this somehow hasn’t been made into a movie yet — The Ministry of Ungentlemanly Warfare.

7) Lee never said anything specific about his time in the SOE, but he did say this: “I’ve seen many men die right in front of me – so many in fact that I’ve become almost hardened to it. Having seen the worst that human beings can do to each other, the results of torture, mutilation and seeing someone blown to pieces by a bomb, you develop a kind of shell. But you had to. You had to. Otherwise we would never have won.” By the end of the war he’d received commendations for bravery from the British, Polish, Czech and Yugoslavia governments.

8) Speaking both French and Italian, Lee spent his time after World War II hunting Nazis with the Central Registry of War Criminals and Security Suspects until he decided to give acting a try at age 25. Yes, all of this happened before Lee was 25 years old.

9) While filming a sword fight with a drunken Errol Flynn during the filming of The Dark Avengers in 1955, Flynn accidentally cut Lee’s hand so badly his finger nearly came off, and permanently injured. Later, Lee cut off Flynn’s wig while Flynn was still wearing it. Flynn stormed off set and refused to come out of his trailer until Lee claimed it was an accident.

10) While best known for his portrayal of Dracula in countless films, he’s also starred as the Mummy and Frankenstein’s monster. Of course he’s known as Saruman in Lord of the Rings and Count Dooku in the Star Wars Prequels, but his other villainous roles include Fu Manchu, Rasputin, Rochefort of The Three Musketeers (his portrayal was so popular the character now inevitably appears with an eye patch, although it wasn’t in the book — Lee introduced it), Lord Summerisle of The Wicker Man, the James Bond villain Scaramanga, Mephistopheles, and Death himself.

11) Lee was not only related to James Bond creator and author Ian Fleming — they were step-cousins — but Lee was actually one of Fleming’s first choices for the role of Bond, not least because of Lee’s World War II and SOC experiences.

12) He has played Sherlock Holmes, his brother Mycroft Holmes, and also Sir Henry Baskerville of The Hound of the Baskervilles.

13) Tired of playing Dracula and feeling that the movies had gotten sub-par, Lee tried to quit Hammer films, but studio executives guilted him into returning by stressing how many people could be out of work if Lee stopped churning out hits. Lee agreed to star in 1966 Dracula: Prince of Darkness, he felt the script was so awful he adamantly refused to say any of the dialogue. Hammer decided that it was far more important to have a mute Lee as star as opposed to anyone else, and thus had Dracula hiss and yell through the film.

14) In the ‘50s, Lee was engaged to Henriette von Rosen, daughter of Count Fritz von Rosen. The Count apparently didn’t like Lee, because after hiring private detectives to investigate the actor and demanding references, he also refused to allow his daughter to marry him unless Lee got the blessing of the King of Sweden. Lee got it.

15) Lee was a major Tolkien fan, reading The Hobbit and the Lord of the Rings trilogy once a year for the majority of his life. He was the only member of the movie cast to have met Tolkien personally — apparently he ran into him randomly in a pub — and fanboyed out. Tolkien actually gave him his blessing to play Gandalf in any future Lord of the Rings movie.

16) When Lee heard that Hollywood was going to finally make the LotR trilogy into movies, he took a role in the terrible 1997 TV series The New Adventures of Robin Hood as a wizard, specifically so he’d have clear evidence of his ability to be a wizard. When he heard Peter Jackson would direct the films, he sent Jackson a personal letter asking to be in the movies along with a picture of him dressed up as a wizard. Unfortunately, Lee’s advanced age and his natural ability to play villains made him an even better choice for Saruman.

17) The story has gone around a lot, but it bears repeating because it is incredible: During his death scene in Return of the King (only included in the Extended Edition to Lee’s disapproval), director Peter Jackson was describing to him what sound people getting stabbed in the back should make. Lee gravely responded that he had seen people being stabbed in the back, and knew exactly what sound they made.

18) Lee was quite interested in the history of public executions, and reportedly knew “the names of every official public executioner employed by England, dating all the way back to the mid-15th century.”

19) He’s always been a big metal fan, but he released his first full heavy metal album in 2010 at the age of 88. Titled Charlemagne: By the Sword and the Cross, which won the “Spirit of Metal” award from the 2010 Metal Hammer Golden Gods ceremony. He made a metal Christmas album in 2012. He was the oldest metal performer, and the oldest musician to ever hit the Billboard music charts.

20) In addition to his impossibly prolific film career, Lee was a world champion fencer, an opera singer, spoke six languages, and was a hell of a golfer.

22) Last but not least: Despite everything you’ve heard about the “six degrees of Kevin Bacon,” Christopher Lee was recognized as being the most connected actor in the world in 2008, again by Guinness. He connects to virtually any actor in 2.59 steps, beating Bacon. 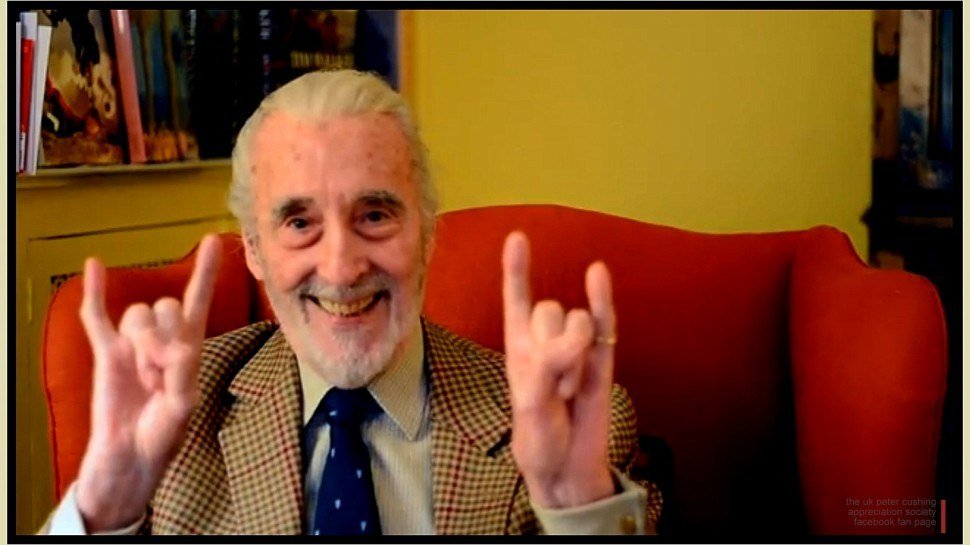